Your Guide to the Best Beers, Wines, Spirits, and Ciders Made in Minnesota 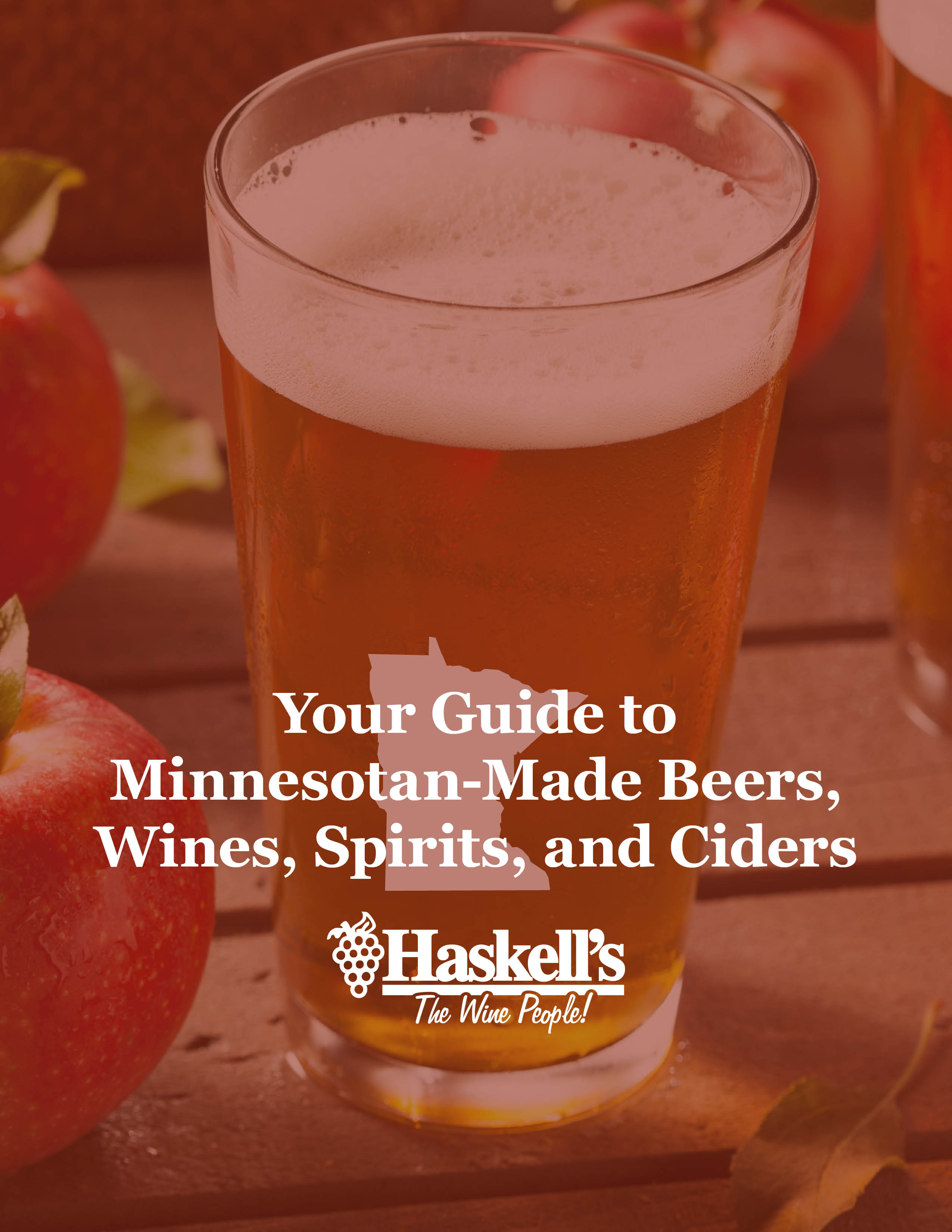 We Minnesotans aren't just nice. We're also pretty lucky to be able to call so many great beers, wines, spirits, and ciders some of our state exports. In fact, some of Haskell's favorite drinks are made in Minnesota. Our hearty resourcefulness has turned Minnesota into a brewer's paradise – over the last decade, the brewing scene has exploded, giving Minnesotans more choices than ever when they want to drink local.

You can't spit in Minnesota without hitting a distillery, brewery, winery, cidery, or microbrewery – but when the drinks made in Minnesota taste this good, spitting's the last thing you'll wanna do.

Here are some of our favorite beers made in Minnesota, where they come from, and where you can find them all at Haskell's.

There's no shortage of great brews made in Minnesota's most densely populated region. It's a veritable hotbed for hops. A microbrew Mecca. A taproom Taj Mahal. (I think that's enough.)

Deep brews, full-flavored ambers, crisp ales, and a philanthropic mission to boot. Finnegan's Brewery has been fueling – and feeding – the community for more than a dozen years.

From a basement in 2008 to their brewery in Stillwater, Lift Bridge Brewery – named after a bridge that connects Minnesota and Wisconsin over the St. Croix River – crafts tasty brews to lift your spirits, too.

Skewing local-heavy, 612Brew takes its brews and its naming conventions from the Twin Cities that surround it. Try SIX, their summery American pale ale named after the trusty Minneapolis Transit Authority bus that runs by the test brewery.

One of the most recognizable Minneapolis beers, Fulton's 50,000-square foot Northeast brewing facility churns out local favorites like Lonely Blonde, Sweet Child of Vine, and The Ringer year-round.

For the out-of-towners, the suburb of Excelsior is the epitome of laker life, a Minnesotan tradition that means you've made it – and now it's time to kick back and savor it. Excelsior Brewing Company's Big Island Blond, Bitteschlappe Brown Ale, MinneGos, and more are the perfect complement.

Another household name for Minnesota beer fanatics, Indeed distributes across Minnesota, Wisconsin, and parts of North Dakota. No wonder – demand for their staples like Day Tripper, Midnight Ryder, and Dandy Lager runs high across the Bold North.

New only by comparison, Bauhaus quickly established itself as an indispensable local taproom with their core brews – Wonderstuff, Stargrazer, Wagon Party, and Sky-Five – and their distinct, colorful, just-quirky-enough branding design.

Summit owes their whole operation to what they call their EPA – that's "Extra Pale Ale." Its popularity helped launch their brewery and expand their offerings to seven year-round brews and a bevy of seasonal tastes.

Somewhere among Prince, First Ave, and the Spoonbridge & Cherry, the Grain Belt Beer sign is one of Minneapolis's most recognizable institutions. The history of the brand is great, but you don't need to know it to enjoy Nordeast, Grain Belt Premium, or Grain Belt Premium Light.

Years ago, Surly launched Furious – and the rest is history. Passion runs so high for this Minnesota beer brewing company that its patrons helped pass the "Surly bill" allowing brewers to sell pints at their own breweries. Celebrate the "Power of the Pint" with Furious, Bender, Hell, Overrated, or any of their great brews.

Never let it be said Minnesotans aren't self-aware. We even came up with a way to say we love Bad Weather. From their Windvane Red IPA to The Hopcromancer American IPA and the classic Belgian blonde Sun Pillar, you could do a lot worse than Bad Weather's brews when clouds gather overhead.

The beer crowd doesn't thin out as you head south. If anything, competition heats up near the MN/WI border. Check out some of these strong Southern Minnesotan beers for proof.

An old hand guides Olvalde's brewing and naming conventions. See "The Auroch’s Horn," "Ode to a Russian Shipwright," and "Rise of the Burghers and the all of the feudal lords" for a few examples – then you need to try them to match the epic name to the epic flavor.

It's hard to get more beer-y than a beer-making family whose last name is the German word for "beer". Try Brau Brothers' creamy, chocolatey, malty MooJoos Oatmeal Milk Stout, ­made with locally sourced milk.

With their Kato beers, Mankato Brewery helped revive local brewing in this Twin Cities suburb. Their Haymaker IPA garnered local acclaim, while Kato Lager pays homage to the history of the Mankato region.

One of the oldest active breweries in America, you could say Schell's is responsible for the modern-day success of craft brewing in Minnesota. Celebrate the legacy with Deer Brand, an Upper Midwest favorite since before prohibition. 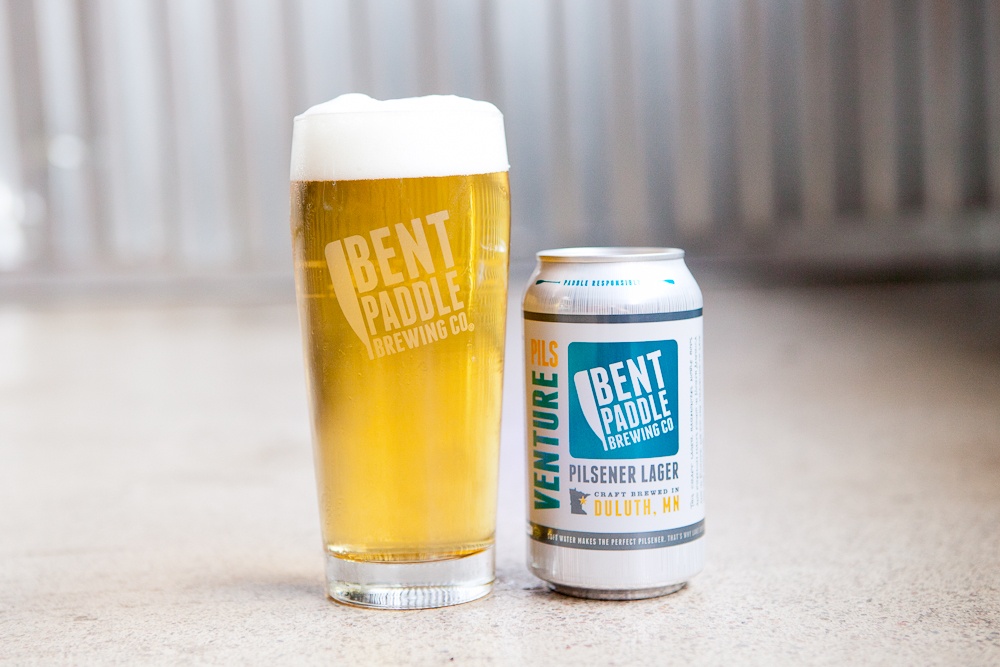 Ships aren't the only tall things you'll find up near Duluth and the Boundary Waters – their beer glasses are no pushovers, either. You'll find a variety of brews to enjoy, from blonde, Belgian-inspired flavors to cream ales and sweet seasonal picks.

When you use a bent canoe paddle to mix your brewing mash, you're kind of accepting that as your name. Try multiple award winner 14° ESB, Venture Pilsener Lager, or any of this Duluth area's flagship brews. 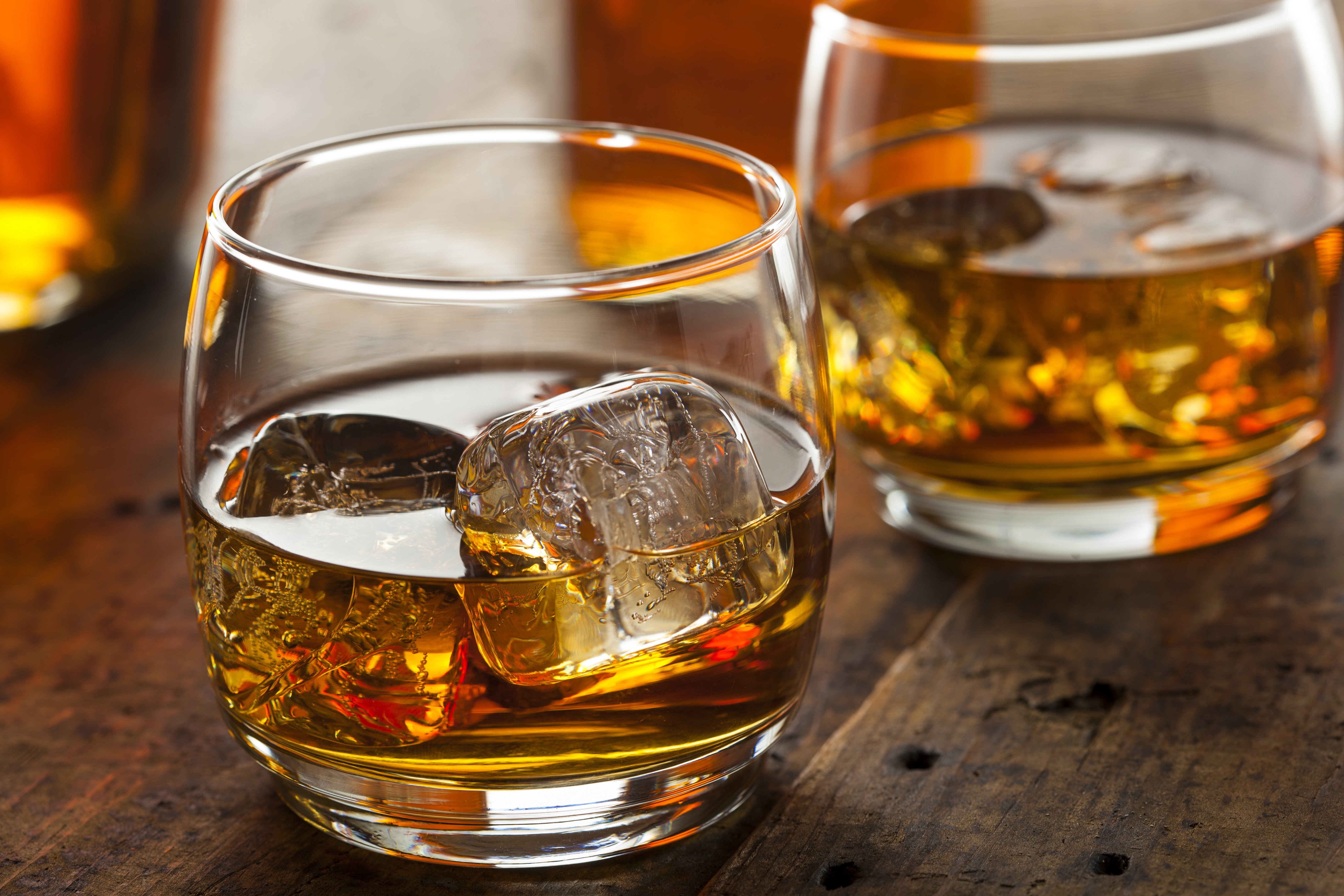 A nice side effect of urban sprawl is the unique drinks that come with it. From Downtown to Uptown, Northeast to Northfield, these distilleries have cemented their place in the Cities.

Making a splash as Minneapolis's first legal microdistillery since prohibition, Norseman now offers over 50 spirits and liqueurs all over the state. The Strawberry Rhubarb Gin is one of our favorites, and Bon Appétit likes it, too.

Ten gallons of coffee liqueur, a White Russian party, and six years resulted in Loon Liquors, making a name for itself in Minneapolis and St. Paul. Look for Loonshine Whiskey, Metropoligin Gin, and the Wheaton Barley Vodka at Haskell's.

This Northeast cocktail room has seen its share of accolades, including Best Distillery by the Minneapolis Star Tribune. Try Orange Crema, Bootleg Bourbon, Barreled Gin, or their myriad other specialty liqueurs.

J. Carver's gin gets its distinctly medium amber hue by resting in Minnesota-made virgin bourbon barrels for weeks and months, which might be why they call it "a whiskey lover’s gin". Their 100 percent wheat vodka, rye whiskey, and bourbon are nothing to sneeze at, either.

Don't let the brewery boom mislead you: Wine aficionados across Minnesota have plenty to love right here in their home state, too.

Alexis Bailley proudly bills itself as a place "where the grapes can suffer," pitting the fickle fruit against one of America's harshest climates. The payoff is a selection so indispensable to Minnesota's wine scene that it's lasted since the 70s. If that's not staying power, we don't know what is.

A variety of specialty wines, rosés, and more give us a little taste of Southern Minnesota's wine leanings. Try the Bootlegger or Sogn Blush today.

Featuring wines made from brand-new grapes grown by the University of Minnesota viticulture program, St. Croix has kept it local to become one of Minnesota's premier vineyards.

Wild Mountain is appropriately located on one of the highest points in Chisago County, just north of the Twin Cities metro. Try the Rustic Red and more at Haskell's. 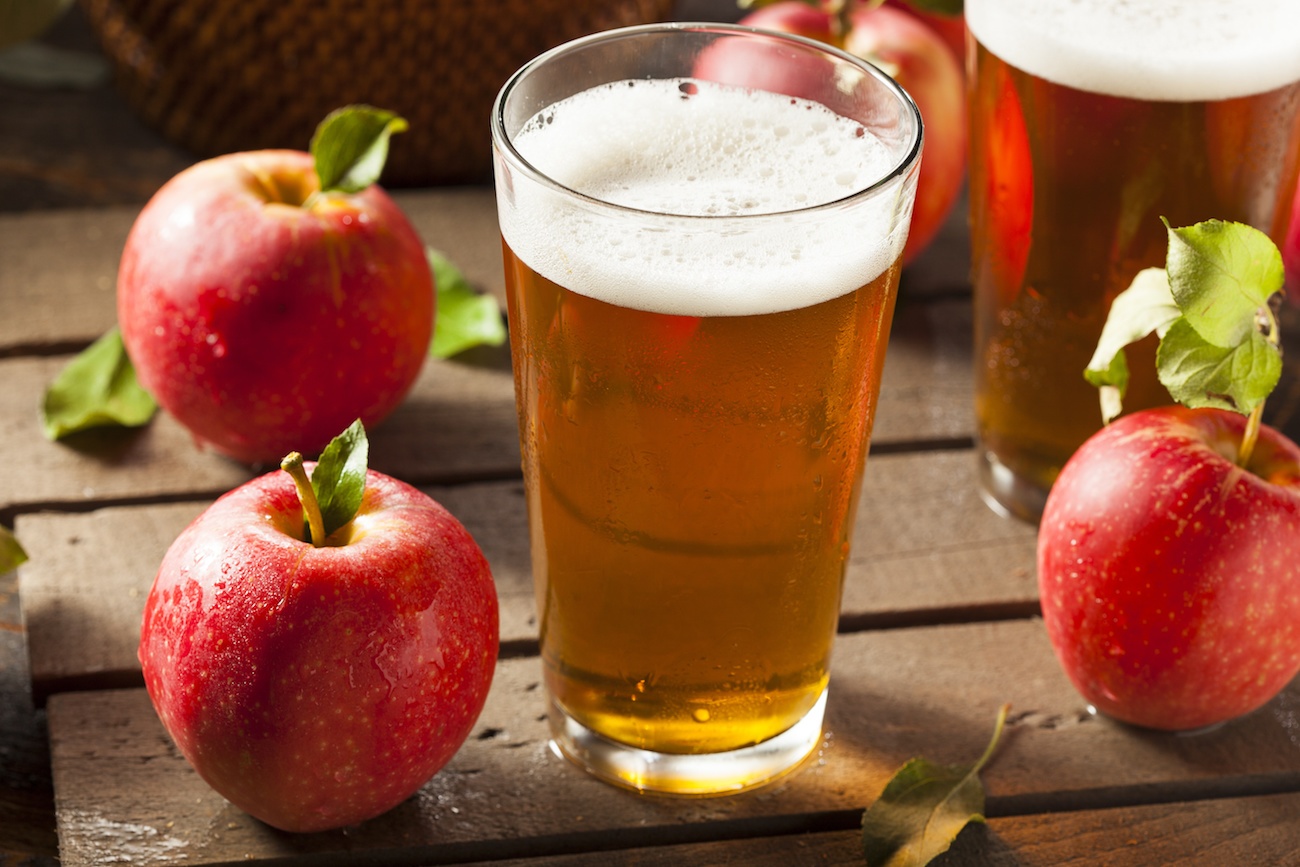 While not as ubiquitous as beer, the cider niche is strongly represented by a few outstanding cider producers in and around the Twin Cities.

"Reinventing tradition" to create "distinctive ciders" translates quickly to "we make great cider" at Number 12. The flagship Number 12 is the culmination of 17 years of experimentation on behalf of this Minnesota cider producer.

Nature and fun go hand-in-hand – both generally and when it comes to great cider. The Honeycrisp apple is at the heart of Loon Juice's best ciders. Try it today!

Start your Made in Minnesota road trip off right with our downloadable PDF. Just fill out the form and download it for yourself.

Can you have vodka on keto? Whiskey on Whole30®? Peppermint Schnapps on Paleo? Changing your dietary habits is hard...

Bourbon Charity Auction: Making a Difference, One Bottle at a Time

As your local “spiritual” adviser since 1934, we have supplied the Twin Cities with the finest wine, spirits, and beer...